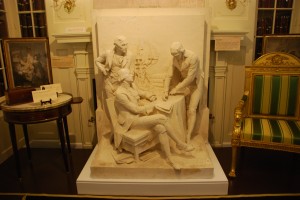 Under the presidency of Thomas Jefferson, James Monroe traveled to France with Robert R. Livingston to negotiate the purchase of New Orleans in 1802. While there, Napoleon offered to expand the offer to include the land from the Mississippi River to the Rocky Mountains. This purchase occurred in 1803 with the signing of the Louisiana Purchase Treaty.1 In 1904, to commemorate the hundredth anniversary of the Louisiana Purchase, this statue was commissioned for the St. Louis World’s Fair. Sculpted by Karl Bitter, this bas relief depicts Robert Livingstion, James Monroe, and Francis Barbe-Marbois signing the Louisiana Purchase, although these men were not all present at the signing.2 This bas relief served as the mold for the bronze statue, which is on display in Jefferson City, Missouri. The statue itself is larger in size than the mold. This plaster mold is fragile, since it was not intended to last much longer after the completion of the bronze statue.3 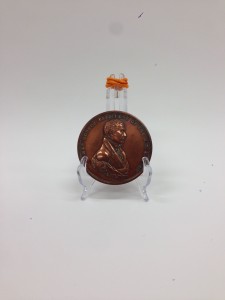 The front of the Peace Medal.

The United States government often made treaties with the Native American tribes. Although these treaties were not always fair or upheld by the United States government, the president of the United States at the time minted them as a physical representation of the peace the treaties attempted to achieve. The medals each had the current president on them, with a new design for each president. Since they started giving them out in colonial times, the first peace medals had the king of England on them. The James Monroe one was modeled after the ones made during Thomas Jefferson’s presidency. Usually, the medals were given to the chief of the particular tribe, who would poke a hole in it and wear it around his neck. Some peace medals given to more important chiefs were silver, while the brass medals were given to lesser chiefs and warriors.4

For more information about why we could not scan the Peace Medal, click here. 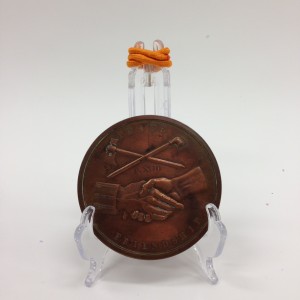 Back view of the Peace Medal