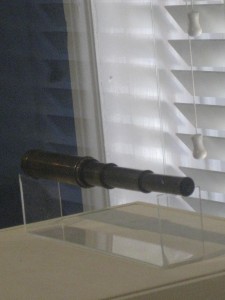 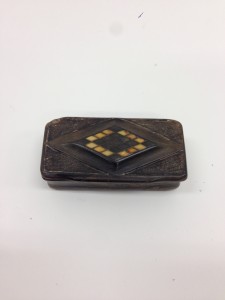 Snuffboxes were common items used by both men and women in Colonial and Early Republic America. Snuffboxes were used to store small amounts of ground tobacco, the “snuff.” Snuff was so named because the ground tobacco was inhaled through the nose through the use of a small spoon; this action of inhaling snuff was called “dipping snuff” because the spoon was ‘dipped’ into the snuff.2 Monroe owned several snuffboxes of wood, tin, tortoiseshell, and silver. This particular snuffbox is made of a wood burl – a knot carved out of the trunk of a tree where the wood grain has deviated from the grain of the rest of the trunk. Monroe also had a wide collection of match boxes, lighters, cigar cases, and flint boxes.3

For more information about this scan, see the Snuffbox collections page.