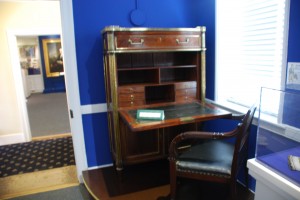 The Monroe desk was used by James Monroe throughout his presidency.2 He wrote his seventh annual message to Congress on this desk, which he delivered on December 2, 1823. Included in this message was the Monroe Doctrine. This section of his address set the standard for the United States foreign policy in the Americas from that point on. It stated that any European attempts to colonize lands in either North or South America would be seen as acts of aggression on the United States.3 Although significant at the time, the Monroe Doctrine fully came into effect when the United States gained enough military power to enforce it later in the nineteenth century. 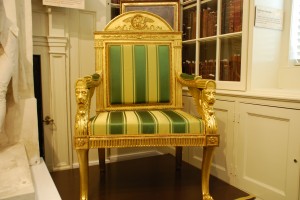 This chair was built in 1806 by Dionisio and Lorenzo Santi as part of a large suite of furniture for the residence of Cardinal Joseph Fesch, the half-brother of Napoleon Bonaparte’s mother. James Monroe would have purchased this chair when he was in France.4 This piece was used in the White House during Monroe’s presidency. Today, a large collection from this furniture suite is displayed in the White House, on long-term loan from the Philadelphia Museum of Art.5