James Monroe was the 5th president of the United States, serving two terms from 1816 to 1825. Monroe was born in 1758 in Westmoreland County, Virginia. He attended the College of William and Mary and then moved to Fredericksburg, Virginia, where he practiced law.1 Monroe led a politically active life. He served as a United States Senator, the Minister to France, the Minister to the United Kingdom, a negotiator for the Louisiana Purchase, the Governor of Virginia, the Secretary of State, the Secretary of War, and then the President of the United States.2

Monroe’s presidency is known for the “Era of Good Feelings” during which the country was at peace and citizens had strong feelings of nationalism. During James Monroe’s presidency, the debate over slavery really started to escalate. The Missouri Compromise occurred in 1820, in which Missouri was named a slave state and Maine was named a free state. In addition, slavery was outlawed in the North and west of the Mississippi.  Monroe is of course known for the Monroe Doctrine, which essentially told the European powers such as Great Britain and France to stay out of American (meaning all the countries in North and South America) affairs, and especially to cease attempts at colonization.3 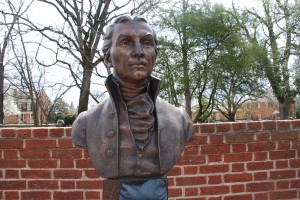 Monroe is much beloved in Fredericksburg where his law firm is preserved. This bust was created both to commemorate James Monroe and his law firm. Sculpted by Peggy French Cresson, a renowned sculptor of bronze busts and reliefs, she donated this sculpture in honor of her husband, William Penn Cresson.4 Mr. Cresson was an architect, writer, and diplomat who wrote a biography about James Monroe that was published by the University of North Carolina.5 It was created to commemorate the James Monroe House.